I am ZIM!!! Fear me…or rather, the diagnosis of a cult classic. 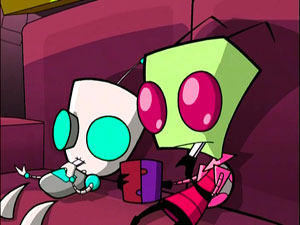 AniB’s thoughts: I was initially planning to sit on this show’s review until October, but with the recent surprise announcement of the series’ return via a movie, and the Fairly OddParents review that I recently wrote, here’s a week of Nicktoons, for better or worse.

Surprised is really the most apt descriptor I have for Invader Zim’s unlikely return. The first show I thought of that may have spurned the move by Nickelodeon to do so was Samurai Jack, which after 13 years of being “finished,” is now airing an absolutely brilliant 5th and final season on Adult Swim on Saturday nights at the time of this writing. Zim, while a completely different show in terms of substance, style and writing does share two things in common with Samurai Jack: a early to mid 2000’s original run, and an incomplete story. And while I’m fine seeing the adventures of Zim and GIR again in movie form, featuring  their ham-handed attempts to take over Earth and do battle with Dib, their archrival, it’d be nice to have a tightened narrative focus, a refresh on the visuals, and some cleaning up of certain “gross-out” elements that figured prominently into the otherwise dark fantasy and science fiction tones of the original series. I do think that a movie might not be enough to do whatever justice the series really wants for a conclusion…but then again, how many times do cult classics actually get new life?

Changing gears a little bit, the original series is rather overrated by its core adherents, but it is a very unique show in the Nickelodeon pantheon at least: its pervasive darkness and science fiction-heavy elements are mixed with a type of kid-friendly black humor that in turn, is also diluted with slapstick and the usual “idiot ball” trope of some really dumb adults (and kids, for that matter); in the case of Zim, it’s almost a prerequisite to make the entirely convoluted plot-lines work, and to that end, it’s really the characters of this show that give it an odd charm. The closest comparable show I can think of in terms of style, era, and substance (to an extent) is Courage the Cowardly Dog: If dark and weird is your cup of tea, or your store of choice at malls is a Spencer’s or Hot Topic, you probably loved both or either of these shows…

Zim may hold the distinction of “cult-classic,” but nobody will mistake it for a masterpiece, and in the case of this production, it’s probably best. Its originality, particularly when it came to characters, shone through- but in equal measure the animation style, with its dark palette favoring purples and greens, and the style of writing overall also had the potential to throw people off. It’s overall an original effort that does more right than wrong- enough so that I’d say it’s at least “above-average” but whether it’s “good” (or “great”) is terribly hard to pin down. At the very least, the movie will hopefully answer a good deal of questions…and give us all a few more laughs.

Animation Quality: Traditional 2-D cel animation. Using muted colors and lots of greens, purples, blues and blacks, Zim’s colors leaned towards its off-kilter version of Earth and the strange universe the show exists in. The character models are very cartoony, but they work well for the show, and there’s only a few models that are truly off-putting. 3.25/5 points.
Characterization: The heart of the show lies in its zany and memorable characters, which in turn catapulted the entire enterprise forward.

Zim serves as the overzealous titular anti-hero bent on proving his worth as an Irken Invader; despite his puny size, big mouth and impulsiveness, his will is stronger to succeed than anyone else in his race…except he’s a menace to them to through sheer bad luck.

GIR, Zim’s dim-witted robotic assistant with a flair for human food, TV and pigs, often makes nonsensical comments and interrupts Zim often, especially when he monologues. Despite being deemed a “defective model” by Irken standards, GIR is actually quite loyal (for the most part) to Zim and contains a powerful array of weapons and modes, though he rarely utilizes them.

Dib, a boy obsessed with the paranormal serves as Zim’s archenemy and is the only human who consistently views Zim as an alien and a threat; this is in contrast to his younger sister Gaz, a dark, gloomy little girl with seemingly terrifying powers and wrath who holds little concern for anything or anybody aside from pizza and video games.

The characters tend to follow a similar line of thinking in each episode they appear in; however, the series does change up the plot lines to keep them fresh, and there is some character development, though not complete. 3.5/5 points.

Story quality: Episodic, with loose continuity. Zim was beginning to build a mythos and backstory in its second season before it was cancelled, which means it was incomplete in the story the show wanted to tell. However, most of the show’s episodes could stand alone. Featuring a blend of trademark humor that blended black comedy, slapstick and some randomness, Zim’s storytelling tended to usually be entertaining and unique, but sometimes strayed into uncomfortable and unsettling. 3.5/5 points.

Themes: Surreal and futuristic, the show’s thematic elements tend to focus more on its trademark humor and Zim’s mission. Therefore, it excels at what it does… but lacks depth thematically otherwise. 2.5/5 points.

Don’t insult the viewer: Dark and creepy are two aspects that happen in Invader Zim. There’s a couple cringe-worthy moments, but it’s a decent watch at the end of the day. 4.25/5 points.

Total Score: 17/25 (68%). Truly the definition of a cult hit, Zim is a unique show with sci- fi and vaguely dystopian themes running through its run. It’s very different, but worth a look if you’re into the types of themes and humor the show peruses, it can be very entertaining. It’s a flawed show, but a good deal of that had to do with its cancellation and the inability to finish the narrative that was developing. Hopefully, these issues can and will be resolved in the movie.