Happy New Year everyone! I hope all my readers had a great end of 2017, and I’m wishing everyone the best in 2018. And to start things off, we’re going back to a classic short that’s instantly recognizable to anyone who’s seen it… Also, it’ll answer the following question:

Well, fret not. The second (and also long-awaited) episode review is a an absolute classic from one of the greatest animators in the history of the medium- Chuck Jones, and in turn, one of the more iconic outings for Daffy Duck, everyone’s favorite hard-luck egotistical mallard. The Looney Tunes are definitely something I’ve wanted to discuss for a while in writing, and rightfully so- the influence of this show and its characters in the history of animation cannot be understated.

Looney Tunes of course, is iconic in animation, and  for good reason. It was a pivotal show in writing the rules to the medium and featured some legendary talent that worked on it, along with unforgettable characters, especially Bugs Bunny and the aforementioned star of this episode- Daffy Duck, who in turn had an interesting history leading up to the creation of Duck Amuck.

While certainly worth an entire “What’s In a Character” piece, Daffy briefly had been the biggest star for Warner Bros. in the late 30’s and early 40’s, usurping the lead role in the common pairing he’d have with Porky Pig. He was the archetype of the lunatic-type character, giving audiences something very different in a protagonist, and on top of that had a fair bit of talent and wit. However, the latter decade quickly saw the meteoric rise of Bugs Bunny as the new main star of the Looney Tunes cast, and so Daffy in turn would find his role transformed into the eternal second fiddle and archival of Warner’s main star, bitterly hoping to be the main hero again but rarely succeeding, in large part thanks to an outsized hubris and always to plenty of laughs.

Duck Amuck therefore, was an interesting exercise in animation. Daffy had been well established and become widely known in the years since his introduction by the public; how would he fare though shoved into completely different contexts that both dug at the fundamental aspects of the form itself, and still generated a fair bit of humor? In turn, this episode delivered something that was simultaneously a deconstruction of cartoons, along with an all-time memorable Daffy episode.

The short first starts off with Daffy armed and ready for what he assumes is a Three Musketeers parody, complete with the title cards to match, the swashbuckling hat and rapier. Unfortunately for him, no sooner does he begin his actions than does the scenery disappear, confusing the duck as he begins a episode-long argument with an unseen animator, who in turn makes it a very one sided debate…

The episode then continues to put Daffy through the paces of a variety of animated questions, all done in a fluid sequence of gags, orchestral hits and bits, and Daffy’s one sided dialogue. What, for example, happens when you take away his voice briefly? How about when he doesn’t even look like a duck anymore, save his voice? All in all, this episode proves to both be quintessential Looney Tunes but also unlike anything else in the show’s long run- where a literally unseen hand constantly and silently breaks the fourth wall. (Who the narrator is though, is a gag in it of itself. The answer might present itself quite clearly to long-times fans.)

“All right, wise guy. Who’s responsible for this?” 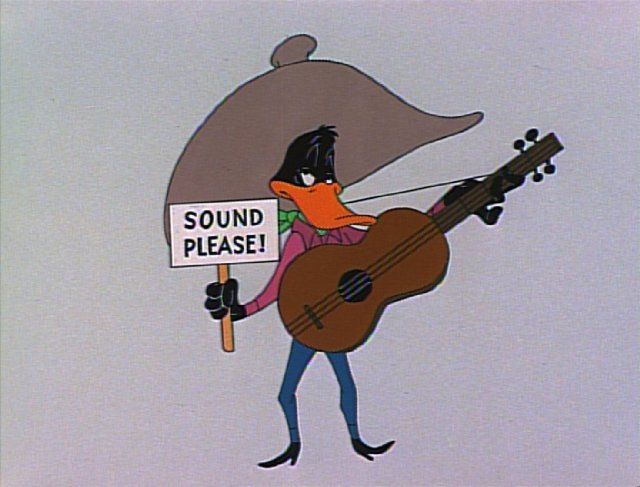 From my own point of view, Duck Amuck is not only brilliant, but required watching for those who want to understand the animated medium boiled down to its very nuts and bolts…all while making for a highly entertaining segment that indeed is very Daffy Duck despite it being nothing like any of his other outings. The pacing and flow of the short is superb, and the transitions (as well as those unseen questions) happen in rapid sequence, which in turn actually causes Daffy consternation, annoyance, and final outright anger at the mysterious source of his misfortune through the show.

Perhaps more interesting yet is still the fact that it’s an animated short that is about the medium itself, beyond Daffy as a front-man. The duck is self-aware that he’s in “an animated cartoon,” and loudly complains about the incompetence of the unseen artist who in turn is the animator himself- which means Duck Amuck in turn is an episode that’s also about the creativity and sorts of zany things animators can in fact do- with the template simply being “this is Daffy Duck in a Looney Tunes short. Go wild! And remember to make it funny!”

Duck Amuck’s simple brilliance continues to shine well over 60 years from its debut. In that sense, Daffy’s character survived intact in this short the final test for all animation- the passage of time- and the presentation and unmistakable presence of this classic ‘toon has succeeded with flying colors in that key regard. In fact, Duck Amuck found itself selected for preservation in the National Film Registry in the US Library of Congress- a rare honor for an animated cartoon- and only one of three episodes helmed by Jones that has that distinction. High praise, indeed.

Happy New Year! (The Bills made the playoffs!) Like what you see? Love the Looney Tunes or Daffy Duck? Leave a comment!