All Might’s chosen successor and the future ‘Symbol of Peace.’ Who is My Hero Academia’s leading man?

To keep the ball rolling on this series, and perhaps inspired in part by the previous two entries in the series that addressed characters who also were students, we now jump from Class 3-E and Nagisa to a class expected to be the elites of hero society- U.A. Academy’s Class 1-A, considered the best and brightest in Japan, with the burden of expectation that they can become the next great generation of society’s protectors. And who better to talk about then the main focus of the entire series in Izuku Midoriya, hero name “Deku”?

(SPOILERS for the My Hero Academia anime follow. This will not cover events that are still manga-only.)

In an unusual twist for the “What’s In a Character” series, Deku’s a character that is still very much a work in progress as his series is ongoing. However, there has been enough material about him at this point to start writing something compelling about his character, especially in the context of his very important role: that of the shonen protagonist.

Izuku Midoriya is compelling in both his earnestness and plainness. Nothing about him screams “leading hero” immediately, but everything about him does yell back “likable!” His younger self is simply precious (Little Deku!) and his current incarnation is simply pleasant, with expressive eyes, messy dark hair and freckles that seem to complement his aesthetic in a pleasant manner. Matched with his appropriately kind manner, he feels like a comfortable old friend you’d root for and you get the sense you’ve seen this type of kid before in some other show, but maybe not cast as the main hero. And yet, it comes together splendidly not only because Midoriya proves to be a natural rooting interest, he’s also genuinely interesting beyond his looks. (Sorry, Kirito.) In that vein, Midoriya’s contrasting appearance is notable with that of Katsuki Bakugo, his childhood “friend” turned archrival. There are several thematic subversions that can be observed between the two, starting with the color of their hair. Traditionally, blonds are seen in fiction as “chosen ones” or “prince charmings” or something of that nature. Bakugou certainly believes he’s the latter, but he’s also no gentleman. Deku’s dark hair suggests a fairly unremarkable character with no particularly interesting fate. Furthermore, to reinforce this thematic idea is that All Might himself has blond hair- and is a realized version of that great promise and potential fulfilled. In fact, the show makes it very clear from the start that Midoriya’s desire is not enough to overcome the obvious disadvantage of being Quirkless, or simply lacking the talent to match how motivated he might be.

A curious note to the Midoriya-Bakugo dynamic is actually the perception of the two from their classmates in junior high versus how they’re viewed at U.A. Midoriya, for the first time in his life, finds himself quite popular among his U.A. classmates for both his earnest, kind nature, incredible resolve and detailed planning (though his mumble storms with the latter tend to backfire a bit for people.) Bakugo on the other hand, after being the king of the hill in high school, finds a similar position at UA with his talent, but not nearly the same kind of admiration at first due to his abrasive nature and generally angry tendencies. However, both Midoriya and Bakugo gain respect from their fellow classmates as the events of the story unfold, and the rivalry continues to bloom, with the explosive power of two rising heroes very much on two sides of the same coin, with two very different approaches yielding them results.

Perhaps this simultaneous difference and similarity in approaches was never fully on display than when the rivals were forced to work together in passing their first semester practical exam, where they approached the difficult task of having to hand-cuff or escape through a designated gate from All Might (“Katsuki Bakugo: Origin,” season 2, episode 23). Forced into a situation where their clashing philosophies and individual strategies did nothing but put them at a disadvantage, it was here that both young men put everything on the line- even their rivalry for a brief moment- and came together to achieve a goal against the very man they aspired to be like in their own ways.

Finally, it is interesting to note that Bakugo was the one to inspire the hero name of “Deku.” Literally playing off the meaning of “do/can’t do” in Japanese, he uses the nickname as a way of taunting Midoriya, reminding him that he won’t amount to anything. However, when the latter meets Ochaco Uraraka, she actually tells him that “Deku” was a great name, giving off the vibe “of a hero that can do anything!” And so, with a renewed outlook, Midoriya embraced the name, something which truly infuriated his rival considering the original intent. Of course, no self-respecting Deku piece would be complete without some discussion about his relationship with the “Symbol of Peace” himself- All Might. The chance encounter in which Deku was saved from the slime villain in season 1, episode 1 turned into an emotional ride in just two short episodes as the mighty hero was revealed to have a surprising and crippling weakness (Superman, he is not), and the fanboy with nothing more than dreams stepped up and inspired him in the most unlikely of ways. Part of what makes this dynamic so interesting is that Midoriya isn’t from some special bloodline, crazy backstory or mythical family ties- he’s just an ordinary kid who with luck and circumstance, combined with unlikely action, won the lottery to begin the unlikeliest of underdog stories just as society’s greatest success story was about to hit his twilight (All Might.) The fact that All Might then followed it up by making Deku train through “10 months of hell” reinforced that even receiving the gift of “One For All” was an obstacle in itself, not to be taken lightly. As the world’s #1 then transitioned to be a U.A. teacher, it was obvious that while he wished for Deku to grow into his role, he also needed to be more engaged in training his successor than he already was- a fact that was exposed by retired hero Gran Torino during Midoriya’s internship when he was the first to help Deku’s power be controlled properly. This breakthrough was juxtaposed against All Might’s professional duties as a hero and more importantly, an educator who had to give focus to all the promising kids under his tutelage, suggesting the underlying strain that came with being the so-called “Symbol of Peace.”

“This is a Quirk passed on from generation to generation. Are you prepared to carry on ‘The Symbol of Peace?'”- Toshinori Yagi, to an overwhelmed Midoriya

One For All as a Quirk in My Hero Academia isn’t just an incredible power, but also a narrative framing device for all of Midoriya’s actions once he earns the right to hold that flame. The old saying “with great power comes great responsibility” rings truer and truer as Midoriya continues to slowly get stronger, eventually gaining a small level of control over his amazingly powerful Quirk- while All Might grows weaker, highlighting that Deku’s control of his power is actually on a clock- a race against time only intensified by the emergent League of Villains and an anti-Deku figure- Tomura Shigaraki, whose relationship to the mysterious All For One is a bizarre inverse of Midoriya’s chance All Might encounter. For Deku and Tomura, both have been given a path to change the world- but whose path will shape the future is now an increasingly tenuous question as the series continues on. Indeed, everything comes to a head when All Might and All For One engage in their long-foreshadowed rematch, and it is at this moment that both sides officially pass the torch on to their fated successors- as All Might fights and wins with the dying embers of his Quirk, and All For One’s defeat leads to his arrest by the authorities, moving both men out of the picture as events move forward.

Deku’s steady but slow growth in learning to control his Quirk occurs at a believable pace within the framework of the story. In a well-done twist, he first has to train his body to receive One For All, but upon gaining it from All Might, he’s able to tap all that power-but incurs a serious cost on himself. After literally breaking himself on a number of occasions, he gradually begins to learn how to control the powerful Quirk he was gifted after the aforementioned training internship with Gran Torino. While it’s my intention to not dive into manga spoilers for the anime-only viewers, Deku’s power continues to develop concurrently with his own self-discovery of his own style. What Midoriya comes to realize is that while striving to be the #1 hero is is goal, he’ll have to be his own man in doing so- and making One For All his own Quirk, rather than mere imitation of his mentor and idol proves to be an extension of that important lesson.

“Come at me with everything you’ve got!”- Izuku Midoriya, issuing a challenge to Shoto Todoroki at the U.A. Sports Festival

Undeniable yet still is Midoriya’s effect on those around him not named All Might or Bakugou. He manages to start making a skeptical Aizawa a believer in his power with a simple ball toss test (“What I Can Do For Now”, season 1, Episode 5), is the first to draw out Todoroki’s fire side during the U.A. Sports Festival (and in turn, trigger a healing process for that boy; “Shoto Todoroki: Origin”, season 2, episode 10), and even shows the so-called “Hero Killer” Stain enough resolve and conviction that the villain, despite being recently beat by Deku, Todoroki and Tenya Iida, has enough tenacity to save his enemy’s life when he is snatched by a Noumu. (“Climax,” season 2, episode 17). It is also Midoriya’s example that inspires a small group of his fellow classmates in the daring rescue attempt of Bakugou after the League of Villain’s successful infiltration of the summer camp, and prior to that, he becomes an embittered young boy’s (Kota) hero in a life-risking battle versus the villain Muscular (“My Hero,” season 3, episode 4.) It is examples like these that in individuals ways, show just why Midoriya was given One For All, as he’s shown a profound ability beyond merely powerful punches and kicks to change hearts and minds, backed by his own conviction in his ideals.

While Midoriya’s story isn’t yet finished, the fundamentals of his character shine through even as important plot points and scenarios shift in the narrative flow of My Hero Academia. There is little doubt that even as Midoriya continues to grow gradually into the massive shoes of his idol and successor, his underdog path, coupled with his conncious choice of hero name (“Deku”) and his vow to “keep a smile on my face, just like All Might,” will serve him well and keep a consistency to the character that has already been established in the series. He might not have the completed story of his rise from hero otaku to top hero, but with a well-crafted fundamental build as a compelling protagonist, the ride continues to promise a lot of enjoyable moments and steady growth as the series continues on with more depth. On a final note though: 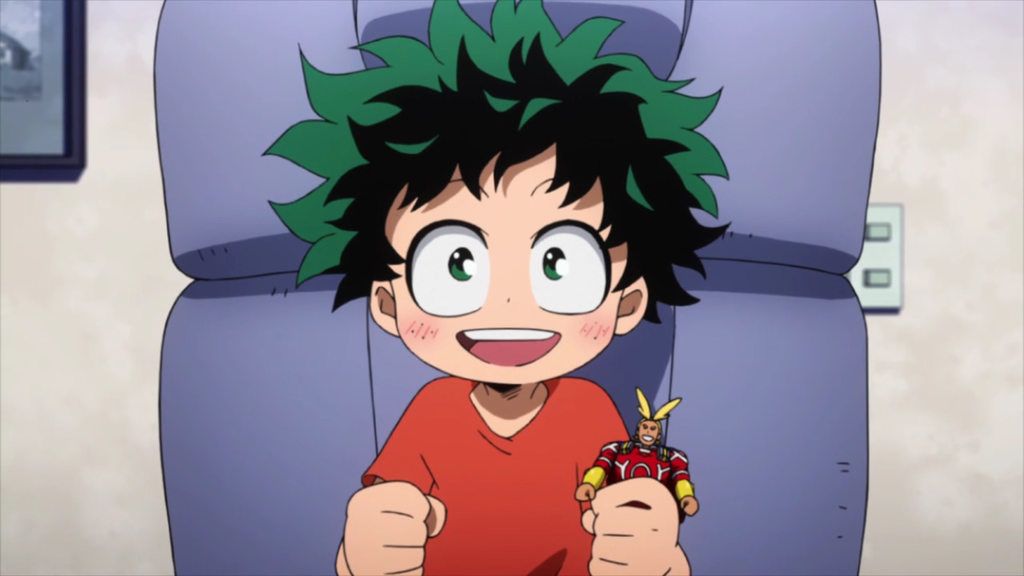 4 thoughts on “What’s In A Character: Izuku Midoriya”