The many faces and roles of an iconic character.

Welcome back once again to the “What’s In a Character” series! After a good run of anime characters, the most recent of which was young Izuku Midoriya, it was high time the focus shifted back to the West for one of these pieces, and today it’s a classic character- the iconic crazy mallard of Looney Tunes, the one and only Daffy Duck. You may or may not recall my episode review of “Duck Amuck,” but Daffy himself is an important character for a number of reasons. 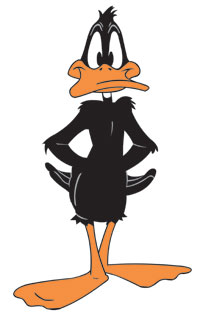 So “why” Daffy? Well, to start with, the character has always been likable in a hilarious way, even if I’ve preferred Bugs Bunny my whole life. Secondly, this bombastic bird actually serves more of an important “history of animation” type character pick, because he was actually the standard-bearer and archetype for a certain type of character, which is of course, “the lunatic protagonist.” Daffy also has served a shifting role from that initial unique characterization to one where he was often, if not always stuck in the shadow of Bugs Bunny, often on purpose, to greatly humorous effect- but in saying that, is consistently characterized in various ways, thrust into different situations as the various plots and demands of directors dictated. 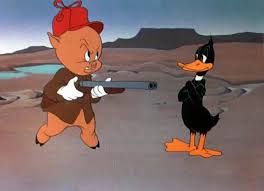 This Daffy looks contrite, but you can bet he’s about to turn the tables on Porky Pig once again.

Daffy’s earliest roles were highlighted by a characteristic “woo-hoo, woo-hoo!” laugh played up to extreme proportions and during those days, his opponent to match wits with was none other than Porky Pig. In this period, he took on a role that would be similar to Bugs Bunny in later shorts- namely that despite his madcap antics, he’d cleverly outwit Porky (or anyone else’s attempts) to stop whatever idea he had in mind. In a way, this always made Daffy different and unique- while he was the first sort of screwball character to take a leading protagonist role in animation, he was always very upfront about his tendencies, and this sort of passive-aggressiveness on imposing his will would cross over into different takes on the character, though Daffy’s greatest narrative “triumphs” in terms of carrying the day as the hero were during the period from 1937-1952.

Notably though, Daffy burst onto the scene at least 3 full years before Warner Bros.’ biggest animated star would, and so those formative iterations of the duck were a unique, quirky snapshot into the character as a leading character for the studio, right before a certain rival rabbit would permanently upstage the mantle as “face of the franchise”- though it would take around another decade before the two finally faced off in a big, famous “splashy” kind of way. 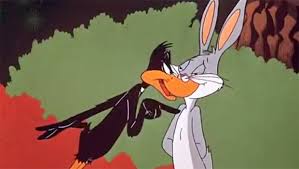 Daffy’s turn from the clever screwball into the vain ego-driven runner-up mostly originated in the 1950’s with the famous “hunting trilogy” series of shorts (better known to most people for the “Duck season! Rabbit season!” silliness). Here, Daffy attempts his usual clever tactics to throw Elmer Fudd off his trail and onto that of Bugs Bunny, who of course is the last rabbit you’d want to get into a war of tricks with. For the first of many times, Bugs proceeds to to one-up all of Daffy’s strategies in humorous fashion while also outwitting poor Elmer, long the patsy of both the duck and the rabbit.

Going forward, Daffy and Bugs’ relationship could best be described as a “friendly antagonism.” Daffy is always the second wheel, seeing Bugs as more of rival than the rabbit sees him as, due in part to Daffy’s ego getting in the way of his thinking. Bugs usually views Daffy with a mixture of pity and annoyance, but also a sort of friend- albeit one convenient to take the fall if the two are in the same figurative boat. This is especially evident in episodes where the two wind up traveling to the same far-away locale, only for the duck to get the worse end of the deal against whatever antagonist of the deal. Perhaps nowhere was this more famous than in 1957’s Ali Baba Bunny, where Daffy actually gets the the treasure of a sultan at the end of the short, only to enrage a genie he failed to take seriously (that greedy ego was talking!) and simultaneously, Bugs wisely bails while the duck meets his unfortunate fate, which leaves him shrunk to a tiny size, famously clutching a pearl screaming “It’s mine! All mine!”

One of the more fun parts about Daffy was his ability to take on different personas and skills, despite the shifting perception of him from madcap protagonist to jilted second wheel behind his forever rival in Bugs Bunny. One episodes, he’d be a noir detective, partnered with Porky Pig (Rocket Squad, 1956); in another, he was the flamboyantly silly space adventurer Duck Dodgers, which helped spawn an early 2000’s spinoff of the same name, and yet another time, he was a parody of Robin Hood, trying and failing to be the fullest example of Sherwood Forest’s most infamous bandit. Daffy may have had some distinct eras as highlighted, but his versatility as a character simply stands out. Outside of Bugs Bunny and to a lesser extent, Porky Pig, no one appears in more different situations through the Merrie Melodies more often than Daffy, and this is especially notable when you consider the rest of the Looney Tunes cast, or even other characters from that time period. In turn, Daffy’s characterization, while consistent with whatever portrayal of the character that the directors wanted in a given short, did not affect his unpredictablity, or that innate ability to simply have everything go right- or very wrong for him. In this sense, the duck is also one of the purest expressions of cartoon making, or the animation process- a pure, unbridled blur in motion where everything about him is about the humor and the punchline, the entertainment and the show, and no higher purpose exists in his realm than to steal the show, be it good or bad.

“Buster, it may come as a complete surprise to you, but this is an animated cartoon!”- Daffy Duck, breaking the 4th wall in “Duck Amuck”

Yes, Daffy is an icon now, but before he was a trailblazer in animation as far as characters go, and we’d be foolish to be remiss of that. He started his life out as a character type that had never been featured on the level he was before him, and he continued to remain popular even as his roles changed and  the years kept rolling onwards, due in no small part to being a character able to take on myriad roles. While this piece focuses largely on classic Looney Tunes animation from the golden age of the show, his cultural presence continued on unabated even as the Looney Tunes entered a more quiet period in the 70’s and 80’s and well into the 90’s and 2000’s, where more modern takes on the ‘toons began to emerge. In newer iterations, Daffy tends to be often paired up once again with Bugs Bunny, perhaps on friendlier terms than they ever truly had in the original visions of animation luminaries like Chuck Jones or Friz Freling. However, the definitive iterations of Daffy still stem from his golden years, be it the “change-up pitcher” of unbridled mischief, or the greedy glory hog doomed by his own impatience and ego, and like the best of Looney Tunes, old episodes featuring the macabre waterfowl find themselves still impactful decades and generations later. It’s not every day a older character gets the royal treatment in this column, but if anyone is well deserving, it would be a pioneering character with an lasting legacy, and for once, it can be said Daffy won! This mad duck can treasure this victory, because well, in his words:

It’s all his, folks!

9 thoughts on “What’s In a Character: Daffy Duck”