A polarizing show leads to a far less than enjoyable watch. 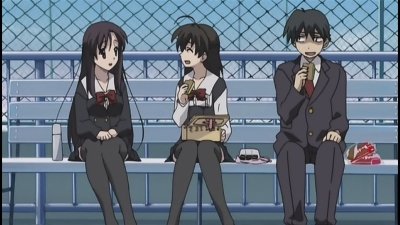 Day 12! We’re halfway to Christmas Eve already, and as we reach the halfway point of this calendar between today and tomorrow, it wouldn’t be complete without at least one-old fashioned critic’s assault. That’s right- today’s a juicy breakdown of a highly controversial anime, one that yours truly is happy to dig into (despite putting it off for a long, long time.)

AniB’s thoughts: “Another day, another adaptation.” Or at least that’s what I’d like to say, except when the show in question is an utter trainwreck and I steeled myself to watch it on a critic’s honor mixed with morbid curiosity. This is unequivocally a bad watch, but the “why” of it is slightly more nuanced, like layers of a rotten onion that’s been left out in the sun, reminding everyone why it stinks so much. Unfortunately, it’s time to delve into the morass and figure out just what went wrong here.

Before really tearing into the details though, a little background as usual is helpful. First off, School Days never received a stateside dub- and it’s just as well, not only for content reasons but also for critical reasons. And as with any truly bad show, there’s always some interesting stories associated with it- in the case of this one, its infamously violent ending that caused the show’s final episode to be removed off the air for several networks in Japan. This caused the footage to be replaced rather infamously on at least one station with stock imagery, including a Norwegian ferry spawning the “nice boat” meme on the internet, and while this is a fun little piece of trivia, it only begins to scratch the surface of the “why”.

So here’s the heart of it: When I graded out the show, it got points for having the bare bones of a plot that linked together cohesively and achieved its (poorly conceived) goals, but between the cast I wanted to strangle, the janky, awkward transitions into more and more ridiculously stupid situations caused by quite possibly the worst protagonist in anime, Makoto, and the fact that it was an utterly banal experience devoid of much enjoyment.

Among numerous flaws, a major issue lies in where the plot wants to go. It initially wants to be a high school romance…but doesn’t do that well, devolving into a bad harem anime…but also does that terribly, and then after enduring 11 episodes of mind-numbingly bad writing and poor character decisions, that final episode I mentioned goes for a shock twist slasher ending that makes utterly no sense. Maybe it was supposed to be relieving, but I was under the impression I’d wasted hours of my life watching something so that you, the readers, didn’t have to. If this was the proverbial coal in your Christmas stocking for a show, this one is it! Do yourselves a favor and check out almost any other show you can roll on a roulette wheel. It’s likely to have better odds of being good than this unfortunate production.

Animation Quality: Average 2-D anime for its release year (2007); it’s not outstanding in this department, but “adequate” would be a better term. Sadly, this is the best part of this wretched show, which is damning praise considering how remarkably average said animation is. It’s also used in some painfully cringy scenes through this show to just unfortunate effect, and yes, there’s some fanservice in there that’s utterly forced. 2/5 points.

Characters: This may be the least engaging, least sympathetic cast I’ve ever had to cover, which is saying something considering “gems” like Fanboy and Chum Chum are part of that listing.

Makoto Iko is the lead character; a freshman in high school whose natural interest in girls at his age becomes more and more perverted due to both the actions of others and his own misdeeds. He winds up becoming the center of a badly conceived harem and unable to fix his passions and poor decision making, he’s a truly awful character who garners little sympathy with little development. Was this intentional? Probably, but he’s so poor for a lead that following his moves becomes dreadfully difficult after not too many episodes…and this isn’t a long show!

Kotonoha Katsura and Sekai Saionji are your two main girls. One is Makoto’s first romantic interest, who is initially reserved, well endowed and from a rich family-but after events happen, she snaps mentally, trying to possess Makoto. It’s always the quiet ones who lose it the hardest…

Sekai on the other hand is Makoto’s classmate who spurns on the initial relationship between Makoto and Kotonoha, but later develops her own feeling for the boy, leading to a confusing and depressing arc for an initially energetic girl. By the end, she’s also gone off the deep end in her affections with who else- Makoto. In the end, nobody’s really happy, everyone goes insane, and then with the aformentioned infamous ending in my thoughts, everyone winds up dead or insane. Yay.

The supporting cast for this show is both unmemorable and doesn’t really do anything to raise the merits of this unfortunate lead trio. 0.5/5 points.

Story: Gets a bare minimum of a half-point for having a narrative that actually goes from point A to point B. I don’t have much more to say about it other than I’ve seen episodic shows with more interesting episode to episode plot-lines than this overarching story…and those had nothing to do with each other! Jumping from bad romance to bad harem to bad slasher at the end, it’s a depressing slog filled with unlikable characters, poor decisions and utterly surreal outcomes. Then again…it’s based on a VN that plays out like this, but I doubt even the game is as poorly executed as this show’s plot! Just eye-opening in the worst of ways. 0.5/5 points.

Themes: A trail of mentally broken girls and an obliviously malicious main character is not a good look for any show, especially one begging to have some scrap of positive momentum in it. There’s no levity and no thematic brilliance here in this clunker of a script. 0/5 points.

Don’t Insult the Viewer: Brutal writing combined with a terrible cast and an impossibly inane story is quite insulting, to quote this category. Unremarkable music does nothing to save this score, or this show, and perhaps the biggest affront is being “bad, boring and a waste of time.” That’s exactly what School Days accomplished. 0/5 points.

Overall: 3/25 (12%): “It’s a show”- that’s the best I can say here. What a disaster on every level. From vapid storytelling to a downright unlikable cast, and a show that seems unable to make up its mind what it wants to be- and then executes none of it well, it’s a forgettable, frustrating and poor outing of a show. The best part is when it’s over, frankly.