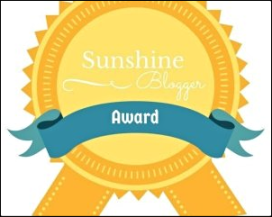 Hi! I’m back off hiatus again, and to kick off the start of summer officially, it’s the Sunshine Blogger Award! A big thanks to The Pantless Anime Blogger (TPAB) for passing this tag onto me! Check out his blog here, it’s good stuff. Before we dig into the meat and potatoes though, da rules:

Now…I’ll do my best to answer these questions, come up with some of my own, and pass it on!

In a Jump All Star rumble, who would you pick to win? Saitama from OPM, Korosensei from Assasination Classroom, Dio from Jojo’s Bizarre Adventure or Kankichi from Kochikame?

Well, the easy answer here is Saitama. His entire gag is based around being so stupidly strong to the point he’s bored, longing for a new challenge- and this is despite facing some unbelievably powerful individuals in his own series. Much as I love Korosensei and Assassination Classroom (seriously, I wrote both a review and a whole character piece on Nagisa Shiota), there’s no reason to think the caped baldy wouldn’t take this. (Apologies to DIO too- after all, he actually lost.)

I’d go to my room to watch animation and write. Or I might go to the Y to work out. Depends, there’s more than one way to deal with stress!

Usually a cup of coffee with some milk or half and half in the mornings, but tea is very relaxing at night, or when you have headaches. Chamomile is my favorite, but I also like green tea. And in both cases, it must always be hot!

A random dude in a cat mascot costume suddenly rushes towards you on your way to school. What do you do?

My first instinct might be just to knee the guy in the stomach, but that would injure me more than him, probably. So I sidestep him and ask what exactly he’s doing, provided he’s not there with lethal intent. Overall, it’s a strange incident unless it’s Halloween or the weekend of some local comic-con, in which case I doubt anyone blinks.

Truck-san just helped you travel to another world. Which world? The Harry Potter world of Zero no Tsukaima or the WWII-esque world of Yojou Senki and yes, you’re reborn as a loli here too.

Do I really have to answer this? And no, it’s not just because I’m being summarily forced to be a loli, it’s also because I haven’t covered either of these shows. But, to call a quick audible…I have seen Little Witch Academia (a Harry Potter-esque world) and Girls und Panzer (girls who compete in WWII-era tanks), and both those worlds seem fun for different reasons. Furthermore, they both allow me to get away with that other stipulation without so much as a question (as they feature primarily female casts), and I learn magic or become a skilled tankery practitioner. Win-win, I say!

Favorite drama, huh? That’s a difficult question. So I’ll give an animation answer and a live-action one as well. For the former, Code Geass is always an excellent choice. And for the latter, there’s countless ones, but I’ll recommend Darkest Hour, the 2017 historical drama about Winston Churchill and the events surrounding his early days as British PM.

You’re going to battle a Pokemon in a one-on-one deathmatch. Which Pokemon do you choose as your opponent?

Me, battling a Pokemon in a 1 on 1 deathmatch? Well, preferably it’s something that can’t fight back too well. My first instinct was Magikarp, since it’s a huge, helpless fish, but that might be highly annoying as it flops around trying to get away. So I’ll go with Caterpie. String Shot silliness asides, it’s a big ol’ caterpillar.

Well, there’s a lot of series that might qualify as this in my mind! Lots of times it also mingles with “my own favorites,” so I’d say things like Ed, Edd n Eddy in the West count (seriously, it never gets old), or Dragon Ball Z in the anime department. I could rewatch those battles anytime.

Would you rather drink a blendered juice made of apple,celery, and pork fat OR mint, tuna and chives?

Neither, please and thank you. Mint, tuna and chives might be the start of a nice dish, actually. But either one of these in drink form would be awful.

What’s the main reason you wake up and leave bed in the morning?

Pretty simple answer to a question that affects us all: we all have the gift of life, so use it to the fullest! Make every moment count, and take in each minute as the unique moment in time that it is. Carpe diem!

So, 10 questions from me to the lucky folks I choose:

-What’s one animated show you’ve watched that you didn’t expect you’d like going into the watch, but wound up really enjoying? (It can be anime or Western animation.)

-Sports fans are everywhere, so if you’re a sports fan, who’s your favorite team and if so, why?

-What’s the best thing you ever ate?

-Name a popular series that you disliked, contrary to most people’s opinions?

-Is there a city, place or a country you’d really like to visit on a vacation?

-What’s that one show or movie you always intended to see or watch, but never got to yet?

-Since I liked this one from TPAB a lot, your guilty pleasure movie/anime/series?

-If you had a dream job, what would it be? (And if you already have it, share it!)

-Ok, one fun theoretical setting question: A school relay competition is held between Kunugigaoka Junior High’s Class 3-E (Assassination Classroom), U.A. High School’s Class 1-A (My Hero Academia) and Luna Nova Academy’s girls (Little Witch Academia). The objective is to use teamwork to move a baton about a mile and a half (or 1.6 km) to a finish line, and the course is lined with dense forest. Who wins, and why?

-What inspired you to be a writer and/or a blogger?

Alrighty, that’s it from me! Now, 10 lucky people to receive this tag:

I’m looking forward to what folks have to say! Thank once more to TPAB, this was a lot of fun!