A big isekai series gets the review treatment. 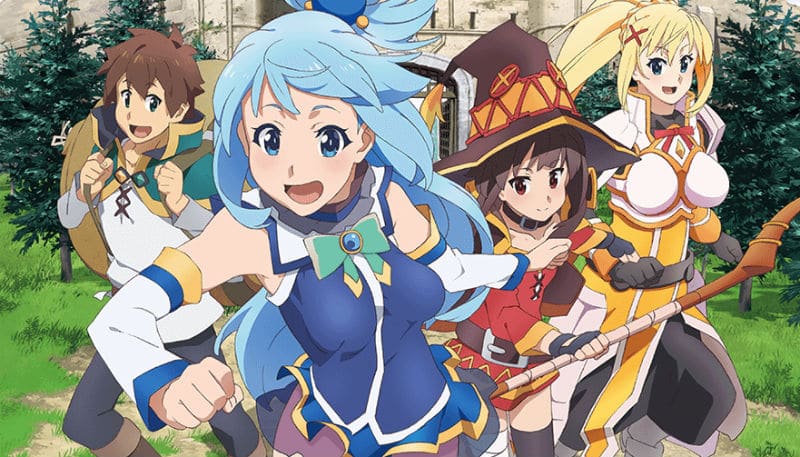 Happy Thanksgiving everyone! It was probably inevitable that this series would eventually wind up on here in the form of a review. One of the most recognizable shows in the overplayed isekai genre, it’s been the subject of much recent popularity, particularly with recent appearances in the topical spin-off Isekai Quartet and a new limited-release movie that was in theaters.

This irreverent, at times raunchy comedy is far from flawless and certainly has plenty to get on its case about, but it also hides great cleverness in its delivery and seems well-aware of exactly the type of show it is. For as up and down season one is, the second season delivers with more precision and playfully takes jabs at all the things the first act would deserve palpable criticism for, largely in the department of Kazuma’s perverted and lecherous tendencies.

Speaking of our lead: Kazuma’s the quintessential glue guy protagonist. He’s the reason the show exists but at the same time the rest of the cast is infinitely more interesting. A loser shut-in NEET in his previous life, his mix of cynicism and bad tendencies makes him often unlikable, but on the flip side, he can be smart, practical and responsible- all aspects that compete constantly in the series with his more unsavory side. He is in a way the perfect partner for Aqua, the bumbling fallen deity- offering his brains to her brawn, but the two often bicker, between the former pointing out the water goddess’s wanton spending habits, and the latter often taking jabs at the protagonist’s previous life.

The most intriguing and likable character in this wacky series may be the archmage of explosions- Megumin. A member of the Crimson Demon clan, she’s devoted to explosion magic- and only explosion magic, going so far as to forgo all other disciplines or auxillary skills that may have aided her (mana supply anyone?) She has a specific reason for this obsession, but unfortunately this review won’t be talking about the film or heavy series spoilers, for that matter. At any rate, she’s got a top-rate design and a good amount of common sense and decency compared to her immediate contemporaries…though admittedly, that’s a low bar.

Despite being up and down in a very traditional critic’s sense, Konosuba is fairly enjoyable for the most part. It will never be mistaken for a top-class story or an incredible plot, but it is comfortable being the weirdly red-headed stepchild of a saturated genre, preferring to not take it that seriously, or just flip convention upside-down on its head. It’s also fortunate both seasons exist, as the show really starts to find its stride at the end of the first season, and the continuation carries forward relevant story threads and consistent characterization. At the time of this review’s writing, the 2nd season has still not received an official dub- a slightly strange conundrum given the series’ relative popularity and the 2017 release date. If you haven’t watched it yet, you may love or hate this series, but I wouldn’t rec this to the below 16 crowd either. Onward to grading!

Animation: Modern 2-D animation in all its glory. The colors pop, the main character models are easily memorable, and action sequences pop, especially with some more nicely integrated 3-D animation in the mix. All that said, a nice little bit comes off the top for some frankly unfortunate fanservice, which also contributes to some of the series’ more questionable bits of humor.

Characterization: Already talked at length about Kazuma Satou, the main protagonist, in the thoughts section. He’s not anything too special for this genre or as a lead, but he’s fine in the role he serves.

Of greater interest are his traveling companions, including the goddess he wishes for as a companion in his new world- Aqua. While she takes her actual role rather seriously, she’s proven to be a total idiot in matters of common sense and strategy, a fact borne out humorously by correspondingly low scores in IQ and luck on her adventurer card. Officially a deity of water, she actually possesses strong powers and abilities related to both her element and just holy properties in general…which is often borne to jokes. (She’s a magnet for the undead, and her most popular water powers are an oft-repeated party trick.) Inexplicably tied to Kazuma as a result of his wish, her motive is to defeat the Devil King and resume her heavenly duties, but it can be questioned if this really is her goal as time rolls on.

“Darkness”, real name Dustiness Lalatina Ford, is a crusader sworn to a different deity, Eris (who Aqua does know and does not think highly of)…but here hides a masochist beneath the surface of valor and bravery. Darkness became a crusader for a few very specific reasons, and at the top of the list may be her unrivaled passion for questionably abusive acts perpetuated against her. Despite this questionable vocation, she holds other secrets that make her less one-dimensional than first impressions would suggest.

I’ve also discussed Megumin in the thoughts section prior to here.

The supporting cast is stereotypical, although this may have been intentional to drive home an absurdist humor point about tropes in general. I’ll note Wiz- a powerful magic user who hides a great secret, and Yunyun- another Crimson Demon who appears at a certain point.

Story: Follows an episodic “plot of the episode” theme with character focus and some pseudo-RPG elements included, but the show is stealthily an overarching narrative: namely, Kazuma’s quest in a new world to defeat the Devil King. Stuck in the stereotypical starting town though, it’s rarely a straightforward journey like a game, as our cast finds out. The plots ranges from being fairly intriguing to being…extremely questionable. You’ve been warned!

Themes: Based on everything else said to this point, it could be inferred that Konosuba isn’t a paragon of deep thematic aspects, although the specter of deeper ideas are there: life and death, this show’s rather Eastern concept of reincarnation, deep held motivations that are mostly manifested in surface-level impressions…when you put it that way, it almost seems like the score should be higher, but in the series we’ve been given, it really is an “almost there.”

Don’t Insult the Viewer: Most of the knock here is questionably fanservicy moments, shots, Kazuma’s most ignominious moments and to some extent, Darkness’s bouts of masochism. Despite these moments, there’s a flow to this series and a hard to explain pull that builds as time goes on. The seasons don’t have a bad set of OPs and EDs either!

Total: 16.5/25 (66%): Konosuba, in a nutshell, is one wacky ride, riddled with a rollercoaster of high and low comedy, some impressive action scenes, a few genuinely serious moments, and more than one head-scratching decision. Give it a spin if you’re an isekai fan or are just looking for something a bit different, I’d say- if you haven’t already seen it, that is.

3 thoughts on “Review: KonoSuba: God’s Blessing on this Wonderful World!”