Happy New Year once again! A new year requires new writing, and while a review would have been doable and straightforward to start with, it felt important to bring back AniB Productions’ most popular and liked series again: “What’s In a Character!”

Truth be told, there’s a number of character pieces in development. The term “development hell” is often used in gaming to describe titles that have had delay after delay and perhaps even outright cancellation for various reasons. I’m unsure if that applies also to writing on a blog, but sometimes it happens here with these pieces. To get the quality demanded by both the readers and myself, it takes extra time and effort, but also the juggling act we all know as “time management.”

Of course, nowhere is that skill learned better than in school, and in this “What’s In A Character?” we’re headed back there…again. No, it’s not the super-powered world of My Hero Academia or even a return to the Assassination Classroom, but rather, the charming real-life based domain of K-ON! It seems somewhat difficult to imagine this show’s run ended about 10 years ago at the time of this writing, but its charming characters, animation, and of course- music- have held up beautifully. While any of Hokago Tea Time’s (HTT for short) members are worth looking at in a piece, it’s the junior member of the group- Azusa Nakano- that gets the nod here. Turn that amp up and get ready to rock, as this piece explores this modest, talented member of the crew!

(MAJOR SPOILERS for K-ON! ahead.) 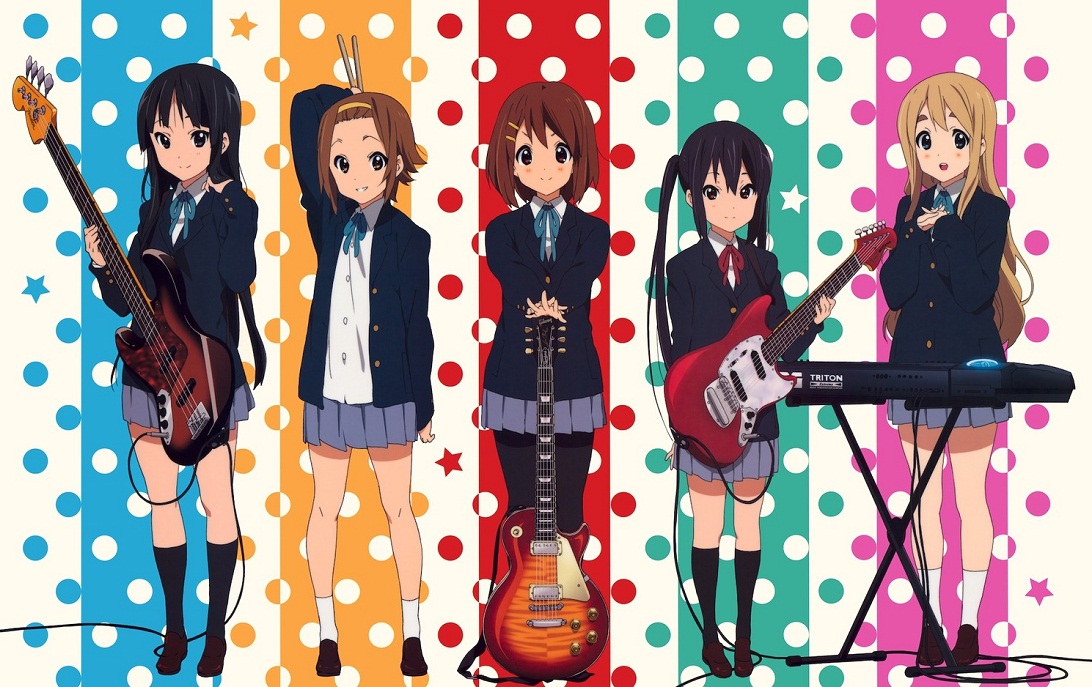 “Individually, they aren’t much…but they sound so good together!” -Azusa Nakano, on HTT’s sum being better than its parts

The main cast of K-ON!, in a word, is “adorable.” It was easy to become captivated by the girls’ everyday lives in high school, and while any one of them would be worthy of a piece, Azusa’s unique traits made her the pick. That isn’t to say the others won’t be revisited in the future, but the youngest member of the band gets to take center stage here.

An interesting aspect about Azusa is that she’s K-ON!’s “hidden” main character- one who doesn’t appear until well into the show’s 13-episode first season. A year in-universe elapses, and at this point the nascent HTT had formed within the structure of the Light Music Club, but outside of Yui, had failed to attract any new members in. While the girls’ “marketing campaign” featuring some dubious animal costumes had the opposite intended effect, it was a concert they gave that got Azusa interested in the first place.

As the only non-founding member of the band, Azusa often questioned the practicality of the club’s relaxed habits, and despite vowing to “not get caught up in their pace!”…she did.  Part of this was because of Azusa’s own mild nature, but the other members also had their own ideas. In particular, Yui affectionately took Azusa under her wing, characterizing her as “Azunyan”, or literally, “Azu-cat.” Their relationship was a weirdly inverted one, where Azusa was the more responsible and level-headed one while her “senpai” was good mostly at pushing her agenda of cuteness. (This is K-ON!, after all.) Some of the show’s more amusing moments came from Azusa’s capitulation to Yui’s will, from sweet treats to the cat-eared headband that both the latter and club advisor Sawako Yamanaka pushed fairly hard.

Perhaps the sweetest culmination of this friendship was when Azusa agreed to help Yui for a local talent show and sing a duet. Spending her personal time, she selflessly helped Yui’s dream become a reality- and in turn the two impressed as a duo, both to the neighbor Yui wished to sing to in the first place, and the other club members who came to watch, with Ritsu even commenting “they really prepped for this!” 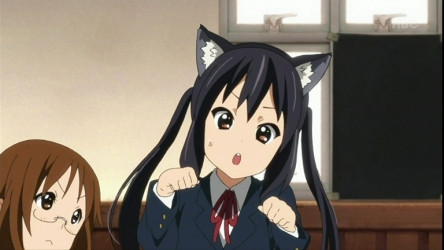 Sawako is so into this moment. “Azunyan,” not so much.

Of course, Yui was not the only one who Azusa fostered a relationship with. She looked up to Mio Akiyama as a role-model of sorts, given her smarts, more practical nature and devotion to her bass guitar…only to be surprised by how shy and easily flustered she could be. In disputes or arguments in the group, Azusa often turned to Mio, but it could be rather hit-or-miss depending on the situation!

Ritsu, the band’s resident free spirit, nearly was responsible for driving Azusa away from the club initially with the excessive tea breaks she liked to take, but did become friends with her as time went on. Azusa was often quick to point out Ritsu’s slacking on her official club duties, but more importantly, served as a counterbalance so that (nominally) more practice happened.

Mugi, as usual, was an enthusiastic friend, and like the other girls, Azusa was surprised at her antics and enthusiasm for everyday life at times. She was indirectly responsible for the latter’s anguish at how much the club slacked off, given that she supplied the tea and sweets- but they were hardly refused when offered, or with little resistance. Azusa also marveled along with the others at Mugi’s hidden family wealth, be it at her spacious beach house or the unexpected discovery that her folks had a place in Finland!

The club’s affection for Azusa as a full-fledged member was seen in many ways, from her cat-themed tea mug that was obtained, to her taking on the role of watching the club’s baby turtle they obtained- Ton. The turtle’s existence in the club room was a result of Yui’s belief that Azusa had wanted him- a thought that wasn’t true at first, but after the effort of obtaining him (via selling Sawako’s old guitar, no less), what had been an initial curiosity turned into a companion the pigtailed girl was very fond of taking care of.

Azusa was also at the center of a secondary trio in the show within her own year, as she became fast friends with Ui Hirasawa- Yui’s younger sister, and Jun Suzuki, a spunky girl who often asked why Azuza joined the Light Music Club, while harboring her own secret interest in the group. The trio had a few spotlight episodes, most of which showcased some summer escapades- and the fact that the focus of this pieces gets very easily sunburnt.

All the silly, cute parts of the series did not change a fundamental fact about Azusa: she was an outstanding guitarist. More serious and dedicated to her craft than her band-mates, she often pushed to practice when no one else would, and sincerely hoped the club would spend more time on music and less on tea and sweets- something that never quite happened.

Azusa provided a major talent infusion upon joining the group, and understood the fundamentals of the guitar extremely well, along with more advanced techniques. She was shocked that Yui did not despite being impressed with her initial performance and energy at the welcoming concert of her freshman year, and in turn would wind up advising Yui more on her craft than the other way around!

It was Azusa’s talent, determination and experience, along with her junior status that made her the only logical choice to carry on the Light Music Club when her friends all were set to graduate. Furthermore, it spoke to her character as a person that she’d be entrusted with the club’s fate by herself, as without her, there was hardly a guarantee for a tomorrow as far as the Light Music Club went. 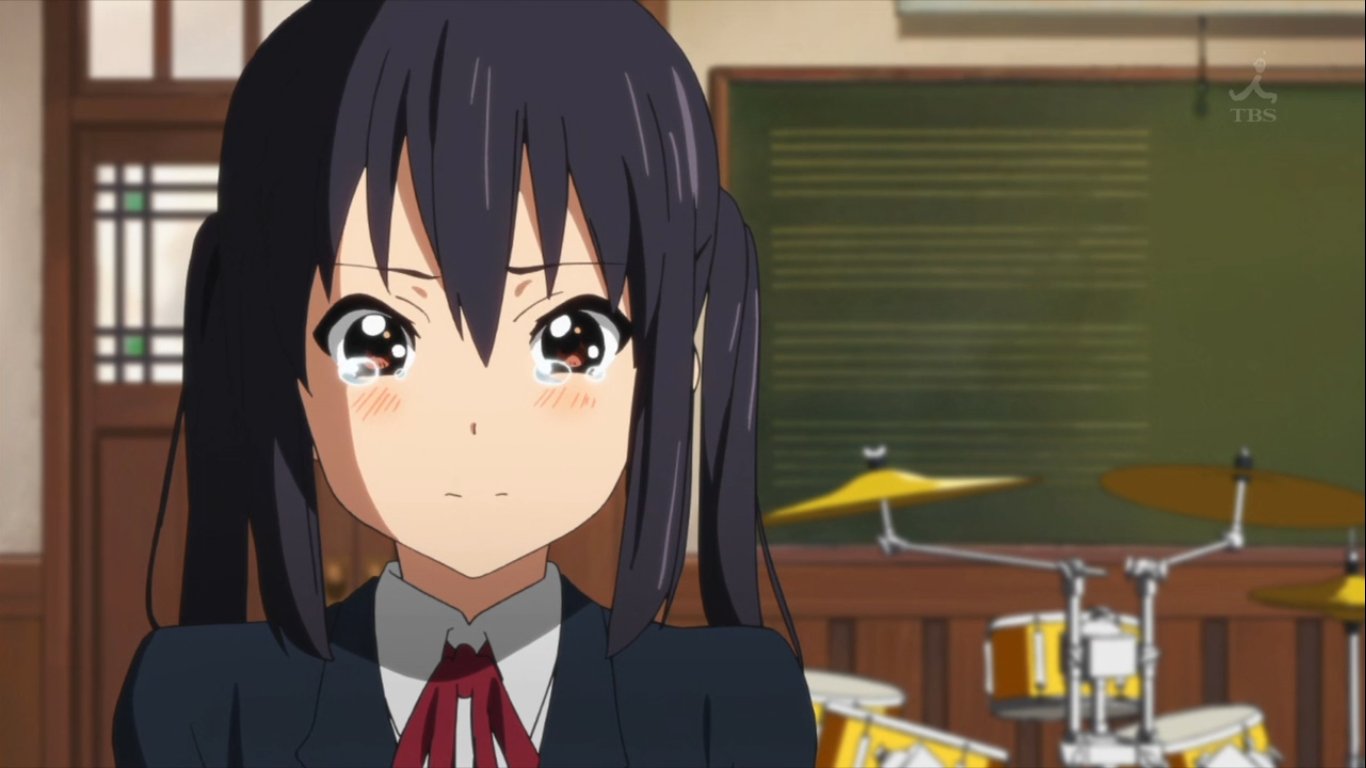 One of the more emotional moments in any show comes courtesy of K-ON!’s series finale, where the graduating members sing a song of farewell and gratitude to Azusa, knowing that she alone could carry the torch at their school. And indeed she does, ending the series playing a solo instrumental version of “Fuwa Fuwa Time,” one of the band’s signature songs. While not in the anime version, she carries on the club and even forms a new band when the others leave, leading the way.

All of the events that form her character point to an individual who was passionate about music, a great friend to those she knew, and a responsible person. Add in that she’s relatedly adorable, and very cute when she’s taken off-guard, and you have a real winner of a character. Not every individual has to have an epic backstory to be great, but Azusa’s strength lies in the total characterization that she receives, both in her own right and in the context of the people around. It’s true that this is a strength as well of what is an outstanding “slice of life” show in general, but Azusa Nakano manages to still be very unique among this quirky cast, and worthy of the “What’s In a Character” designation.

It wouldn’t be an Azusa piece without this scene:

Some things in life are irresistible.

2 thoughts on “What’s In a Character: Azusa Nakano”