He’s obviously not what he seems.

Once again, a character piece appears! This time, we’ll be looking at the summer guardian of Dipper and Mabel Pines, con-man extraordinaire and boss of the Mystery Shack, Stan Pines. When watching Gravity Falls, this character in particular stuck out as unique for a number of reasons: He was an older character in a show marketed to a younger audience that received extraordinary character development; evolved beyond the typical two-bit huckster that most other shows might have kept him as, and he was funny as hell. In a show that is really well crafted in every sense of the word, Stan managed to be a big part of that success- the other main character that kept the show rolling along with the Pines twins themselves- and a perfect balancer that proved to be tremendously important. (Oh, and this piece has massive spoilers. If you haven’t taken a trip into the woods yet, I’d suggest either reading my review, or better yet, watching this show. Like now.)

Tying in with my thoughts from the Gravity Falls review, it is almost impossible to guess how interesting Dipper and Mabel’s “Grunkle” Stan would be from the first episode, or how key he would be in the events that unfolded in the show. Aside from the title cards, which notably names Stan along with the twins as main characters, he is quickly shown off as a greedy proprietor of a tourist trap- the Mystery Shack; irresponsible at best with children (his own niece and nephew are put to work as essentially unpaid employees), and a cheapskate to boot- charging exorbitant fees for homemade works of “mystery” such as the “Jackalope” and “Sascrotch,” a fact that is played up all too often between gullible customers and the fact that the town of Gravity Falls, in fact, has real mysteries and phenomena.  Instead, the show goes for the slow drip of information when it comes to Stan, starting with that same first episode (Tourist Trapped), throwing in the intriguing, but mysteriously out of place moment where he quickly punches a code on a inauspicious vending machine, revealing a secret passage…

The irony of Stan’s stage name, “Mr. Mystery,” is that it doubles as a description for who he actually is. Underneath his smiling visage to tourists lay a man with a weighty past, a present that was actually spent selflessly in pursuit of a very specific goal, and most surprisingly, a family man with a heart of gold…unless you mess with them. (Then you’re getting a brass knuckle to the face.) Without trying to summarize too much, here’s the reasons why Stan Pines deserves a character piece to call his own.

Huh? This is a real reason, AniB? Yes, but it’s probably not in the way you think. Stan is his own man. He wear his underclothes around the house without a care in the world, loves his old TV and comfy armchair, and drives a car straight out of the 1960’s like he’s a racecar driver. He also clearly doesn’t care what other people think of him, as long as he gets some attention (and maybe makes a buck.) But really, this section is just a primer.

The season 2 episode Not What He Seems is universally acclaimed by fans and even critics as one of the show’s best episodes (in a sea of good ones), not the least of which had to do with Stan’s role. (In fact, it has everything to do with him.) As it turns out, he’d been undertaking a dangerous, risky project in the hopes of bringing his brother- Stanford “Ford” Pines, the author of the journals- back home. The Mystery Shack is revealed to be a front in order for Stan to gather the money and the time he needed for equipment to fix the massive underground inter-dimensional portal in the basement of the building; a secret that is revealed initially in Season 1’s finale (Gideon Rises) but comes to a head in this episode, where in the face of a doomsday scenario (a 30 year old portal rending space and time itself), the Pines twins and trusted handyman Soos Ramirez make the discovery. Prior to the last 5 minutes of the episode, Stan had been slowly bonding with the twins over the summer- a prime example of Gravity Falls’ careful development. Starting with a mostly disasterous fishing trip in episode 2 of the show (Legend of the Gobblewonker), he had among other things, gotten over a fear of heights (and ladders) with Mabel (Fight Fighters), helped Dipper prove to Wendy that her then-boyfriend Robbie used a mind-control CD (Boyz Crazy), did his best to protect and help the twins defeat Gideon and save the Mystery Shack (Gideon Rises), participated in a mini-golf outing-turned war (The Golf War) as the getaway car of sorts, and in the episode at hand, shot fireworks off the roof with his niece and nephew mere minutes before government agents apprehended him. While this compilation is not every example, Stan had indeed gone from the absentminded shyster from when the twins first arrived in Gravity Falls, to a loving uncle who they knew as a person…but not in terms of history. 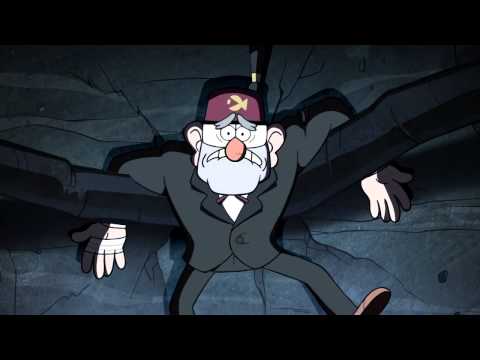 Mabel, do you really think I’m a bad guy?

If you want to really talk about Stan, two words sum it up: Complicated relationships. His past was tumultuous; growing up in the fictional town of Glass Shard Beach, New Jersey, he had a twin brother in Ford, but little else: He wasn’t a genius like his brother, had a reputation as a slacker, and his only ambition seemed to be to sail the world with said brother. After an incident that cost Ford his dream college, Stan (fairly or unfairly) was blamed for everything and thrown out of his childhood home. (While all this can be seen in A Tale of Two Stans, it’s important for context here.) Suddenly, an element you almost never see in a show on a channel generally reserved for a younger audience came into play: An older character with estrangement issues. A rift had grown between he and his brother, and it was physically symbolized by the eventual, short lived reunion that resulted in Ford’s  disappearance into the portal. In that sense, the journals Stan sought to gather, and the portal itself collectively represented Ford- and the deep, deep gap that had developed between the original Pines twins, literally stretching space and time (30 long years). When Ford came back through the portal and gave Stan a square one on the jaw, it was deserved- they had a lot of issues and it was obvious upon thinking about their relationship for this piece and in general, it was absolutely necessary that something dramatic would be the only way to resolve such a gap. It also was a tension that was not lost on the older viewers of Gravity Falls; and that resolution both for the brothers, and Stan’s way of making up for secrets was in the finale: Weirdmageddon. 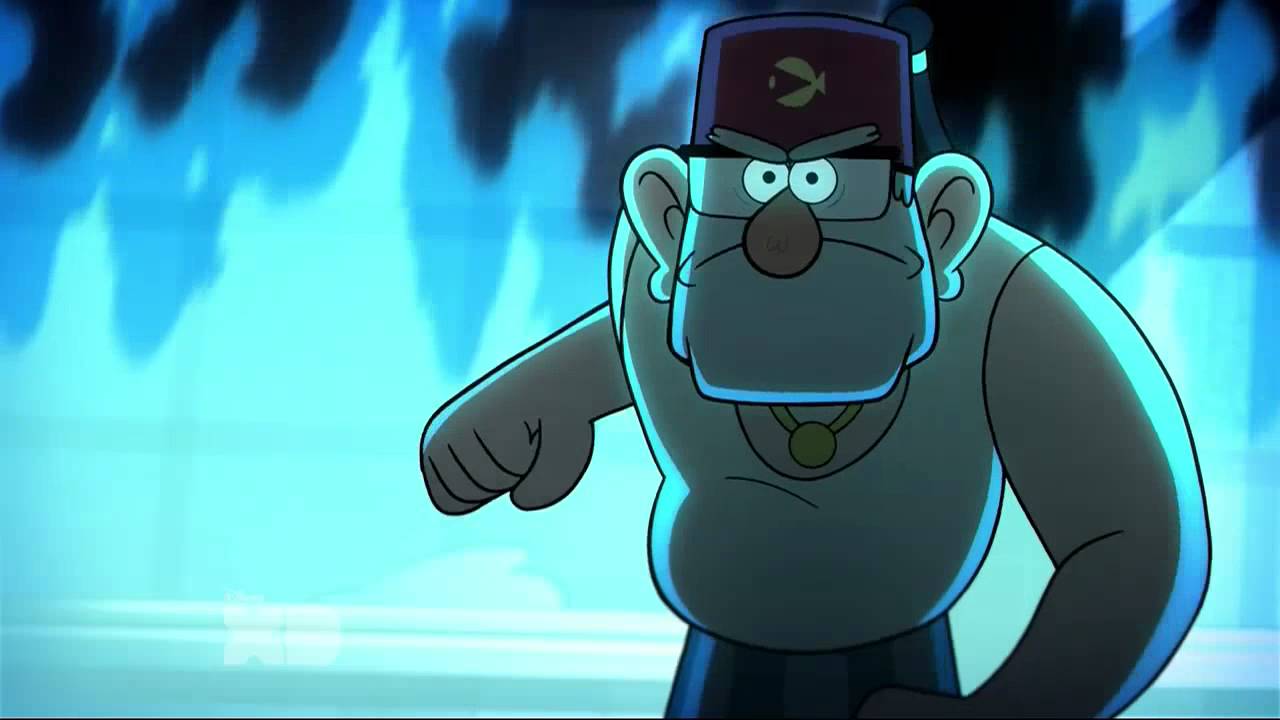 You’re a real wiseguy, but you made one fatal mistake- Ya messed with my family!

Weirdmageddon is as it sounds- the mad apocalypse of Bill Cipher, the deviously evil mind demon, and while a great deal of events happen here, it is Stan’s role in the final act of this arc (and the show) that proves to be both satisfying and an answer to all the questions created to this point. Up to the point in which Stan volunteers to have his memories erased in order to facilitate the defeat of Bill, Ford and the twins had been playing hero(or attempting to). Since the figurative rift of his relationship with Ford had widened since A Tale of Two Stans,  it was only fitting when the literal rift of space-time was opened in Dipper and Mabel vs. The Future that Stan’s resolution would come. In this case, selfless sacrifice to defeat an indescribable evil was the choice- and it brought out the best of the character in spite of his flaws- his sense of humor, ability to “punch things,” his love for family, and of course, the fact that all Stan ever wanted to do was redeem himself in the eyes of the world- or at least the people he cared about. Some fans gripe about the idea that Stan regained his memories too quickly (or they didn’t want it to happen at all), but reflecting on it, it would have been a poor levity of the balance that Gravity Falls struck as a show between funny and lighthearted; serious and dark. The choice to do so also allowed a complete arc between Stan and Ford- the latter recognized his hubris to an extent and finally appreciated the things his brother had been trying to do, and the former proved to Dipper and Mabel who he was, definitively once and for all, and connected again with Ford. Ultimately, without memory restoration, Stan’s first goal in life wouldn’t have become a reality- a chance to sail the world with Ford on the Stan O’War II. Whether it was punching zombies, making “Stan-cakes,” or seeing the twins off at the end of the show, “Grunkle” and “brother” are really the best descriptors for Stan- a real man with faults and strengths and a fun character all too often absent for his character type in animation.

Her aim is getting better! (Get it? If you don’t…well, you will…eventually.)

5 thoughts on “What’s In a Character: Stan Pines”